Every now and then we’ll get a request to review a product, or to “test and evaluate” a product where we have to give the manufacturer a warning up front: if they say it will do something, it had better do it. If they say it will take X amount of abuse or treatment and still function, it had better because we’re going to do exactly that, and maybe repeatedly. Enter the Durabook Z14I laptop.

I took it out to my driveway and…dropped it 26 times.

As with many of the items we get for test and evaluation, we’ll report on the testing we did, how the item held up to the testing and whether or not, at the end of the testing, the item still functioned as it did prior to the testing. Look, I am a bear for abusive testing and have been quoted many times as saying, “In law enforcement, as in the military, everything is what it is… and it’s a hammer.” 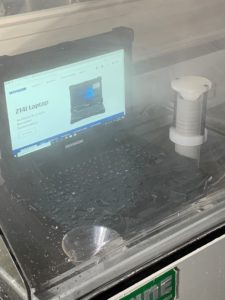 After receiving the Durabook Z14I Laptop test unit, I tested it with no abuse testing first. While I’m not the best at “techno speak,” the Z14I uses an Intel 8th generation CPU featuring an UHD 620 graphics processor. The graphics processor supports the FullHD 1080p widescreen display and if you’ve ever looked at a suspect’s picture in lo-res vs. 1080p you know exactly what the value of such high quality graphics are. It is also equipped with dual band wireless AC 9260 and Bluetooth V5.0 connectivity. Between the two, the ability to move data back and forth with any communications center or reports repository is excellent.

I took it out to my driveway and measured six feet off the ground and, you guessed it, dropped it 26 times. Now the test protocol says “26 faces” so it’s supposed to be dropped in different positions and at different angles so the unit impacts on different faces of the exterior. I did my best to do that but ultimately the unit ended up being dropped a lot on the various corners, the bottom (battery weight) and the back. I was careful to turn it on and let it boot up and make sure everything worked just as it did before I started dropping it all those times. It did. Without fail.

Read the full review on Officer.com